Howdy, when using private keys and SFTP, am unclear on how FZ figures out which key to use for a particular host.

I understand adding in keys via the Connection/SFTP tab, and the first site which was set up works fine. In this case am using keys without passphrases.

However, according to the connection log each subsequent site defined in the Site Manager is using the first key that was loaded. That of course results in a denied connection (exitcode 127 is being reported).

As the SFTP section does allow one to import multiple private keys, it would seem there should be an entry in the Site Manager to define which key to use, especially as some of the hosts connect with the same user name.

Any pointers would be most appreciated.

Now on 3.4.0, I actually can log into multiple clients, but am limited to a half-dozen or so. Problem seems to be the remote server bombing out from FZ trying the keys one at a time until it finds the one that works.

Sure, with root access to all the servers I touch, I could just reconfigure SSHD to allow more tries, but that's not practical. Using SSH_AUTH_SOCK doesn't help because that's just designed for storing passwords, so FZ still cycles through all the keys until it finds the one it likes (so that method doesn't really do anything for passwordless private keys), causing the server to again bomb out from multiple tries.

Hate to use a different app (Quack), FZ has been very good. Someone suggested Mozilla's plugin, but it doesn't appear to deal with passwordless keys. This really is a killer. It shouldn't be that hard for the app to allow explicit use of a particular key per connection.

But since it hasn't been fixed, there must be something else going on. Just curious, what's the complication?
Top

Of course, one *could* just add another key to the authorized keys file for each login, and just use one private key. That's fairly insecue, though...
Top

Filezilla version 3.23 the latest version has a feature on site manager to load your private key-file.

It's the proper way to login without password for specified server. 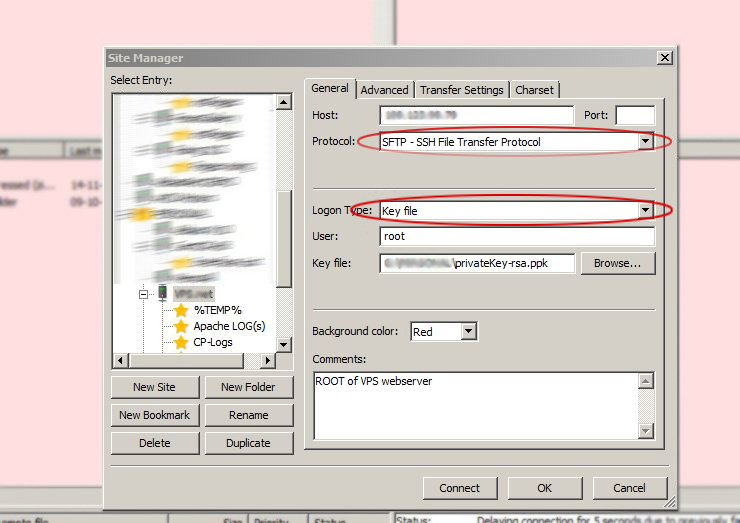 Growing up everyday.
Coding for next...
Top

I guess they will know already. The topic is nearly 6 years old.

Closed due to thread necromancing.
### BEGIN SIGNATURE BLOCK ###
No support requests per PM! You will NOT get any reply!!!
FTP connection problems? Do yourself a favor and read Network Configuration.
FileZilla connection test: https://filezilla-project.org/conntest.php
### END SIGNATURE BLOCK ###
Top
Locked
6 posts • Page 1 of 1