FileZilla Client 3.48.0 appears to contain a Virus per my corporate anti virus software when I attempt to download it using Chrome.

If downloaded from here, there is no virus. Please report the False positive to the AV vendor.

Note that sponsored packages include third-party offers for re-monetization. These are often detected as PUP by AVs.
### BEGIN SIGNATURE BLOCK ###
No support requests per PM! You will NOT get any reply!!!
FTP connection problems? Do yourself a favor and read Network Configuration.
FileZilla connection test: https://filezilla-project.org/conntest.php
### END SIGNATURE BLOCK ###
Top

Also, the built-in antivirus of Windows 10, now immediately deletes the downloaded file. Not an external antivirus program.
Better offer a download without the useless (or even worse than useless) third-party stuff, otherwise people will search (and find) alternative free software. (But it could be that FileZilla doesn't mind that.) Very few people will both read further than the word 'virus', will not read the 'potentially unwanted' part, and also complain to Microsoft. Way too much hassle for 99.99% of people. In effect, the bundled unwanted software will diminish popularity of FileZilla. Also, a dangerous effect will be that people will install old versions with old security holes, or even download from Torrent / hack sites, which would be even more dangerous.

Problem is, only a programmer with too much time could verify your claim: combing through all the code, and then compile self. That does not mean I don't trust the FileZlla part of the download. But it is true that I don't trust the bundled 3rd-party stuff. Even Avast, which is (or was) bundled with FileZilla, illegally sold data of millions of people: https://tweakers.net/nieuws/162902/avas ... sdata.html. Including surfing data! https://www.bleepingcomputer.com/news/s ... rom-users/
So, actually, I think Microsoft I in it's right to block downloads with bundled software. I'm pretty sure they can not be convinced to whitelist FileZilla with bundled software. And I don't blame them.
Top

Now if only they would lead by example and they themselves stop bundling third-party software with Windows to begin with.
Top

Now if only they would lead by example and they themselves stop bundling third-party software with Windows to begin with.

Microsoft being a commercial company and not a governmental entity, I think it is logical that it behaves like that. Not that I agree...
After a long seach, I think I found where I should be able to whitelist the download folder. But it says that I (local admin) can't change the setting: 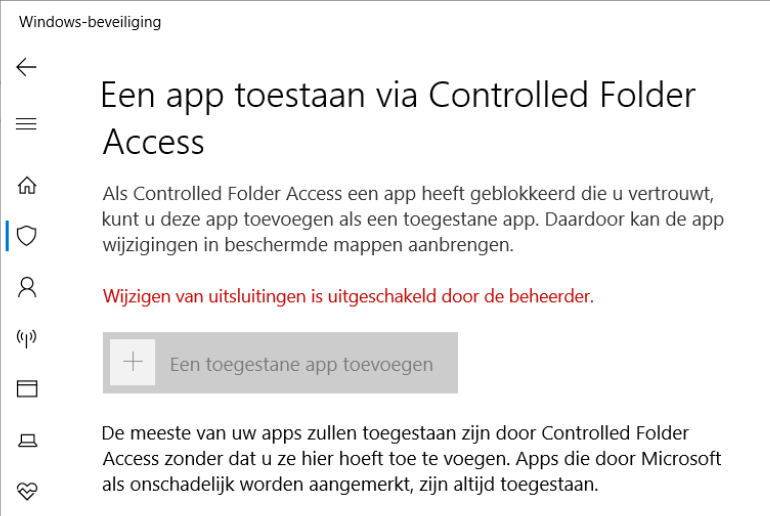 Maybe because the PC is in a domain.
Top

It's funny, as sponsored downloads are optional, but no one ever clicked the link to the complete download page:
https://filezilla-project.org/download.php?show_all=1
### BEGIN SIGNATURE BLOCK ###
No support requests per PM! You will NOT get any reply!!!
FTP connection problems? Do yourself a favor and read Network Configuration.
FileZilla connection test: https://filezilla-project.org/conntest.php
### END SIGNATURE BLOCK ###
Top

It's funny, as sponsored downloads are optional, but no one ever clicked the link to the complete download page:
https://filezilla-project.org/download.php?show_all=1

Well... The big green downloadbutton is way more prominent... (No wonder that most people click that.)
I'd say, because of that, it's not the sponsored download that is optional, but the normal download is optional

I found there was another thread about this subject. In thread 48964 (locked), the site admin said: "There is also a _HUGE_ gap between things you might not want, and things that are actually a threat to you."
That might be the case, but FileZilla actually was bundled with Avast, which sold pseudo anonimized (browser) data. I would put that under threat.
Botg also said: "Let's assume you are male for the sake of the argument. Have you ever watched TV and seen an advertisement for a female hygiene product? You certainly don't want to buy those products, yet would you say you feel threatened by such offers? "
There are differences. Those hygiene products don't get installed on your PC and sell pseudo anonimized data of you.
Top
Post Reply
7 posts • Page 1 of 1