Preview of a new feature

There are a number of recursive operations in FileZilla, for example when adding a remote directory tree to the queue. Currently, during these operations FileZilla navigates the remote directory hierarchy, entering and displaying each directory it visits. It is something that has worked well for over 14 years now.

There are however a number of problems with this approach: To solve this dilemma, recursive operations will become a background task: What do you think? 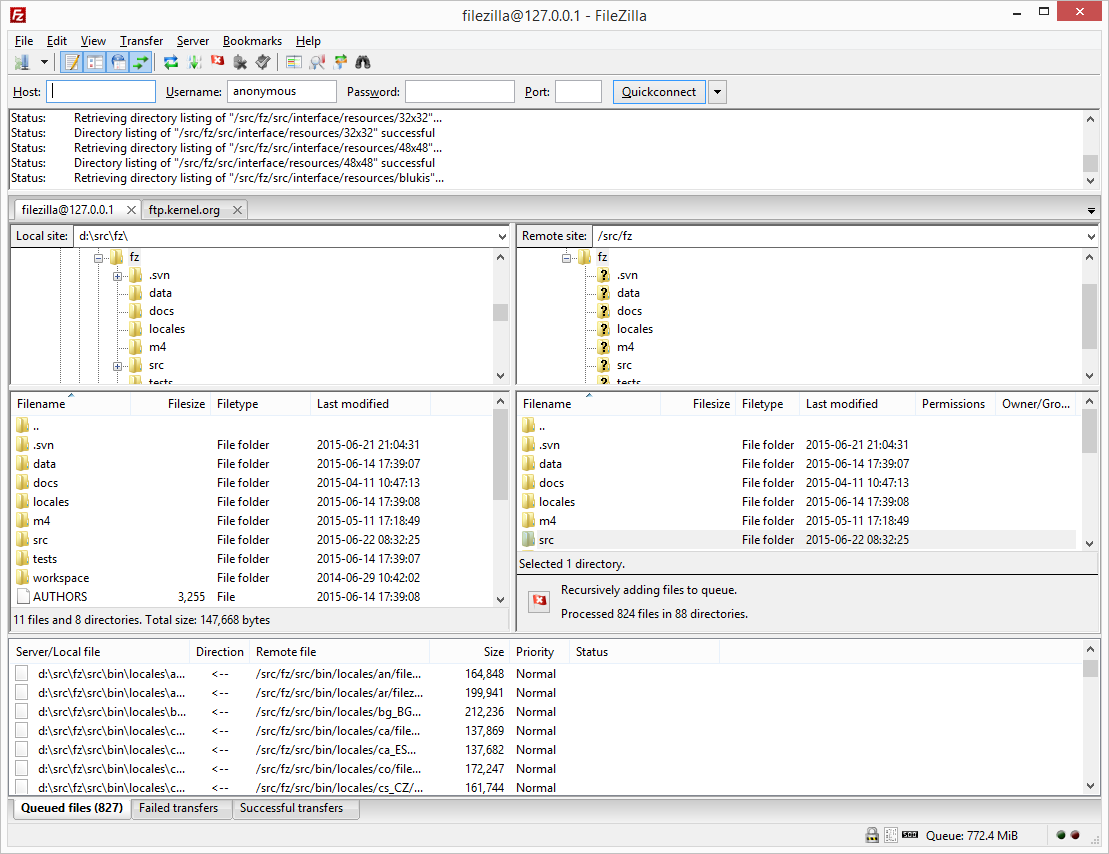 Looks like an excellent improvement. Could you apply it to deleting recursively, too?
### BEGIN SIGNATURE BLOCK ###
No support requests per PM! You will NOT get any reply!!!
FTP connection problems? Do yourself a favor and read Network Configuration.
FileZilla connection test: https://filezilla-project.org/conntest.php
### END SIGNATURE BLOCK ###
Top

That's already the case in the repository


SSLv3 MUST NOT be used.

This makes me very happy.
Top

Should kick those slackers into gear, eventually.
### BEGIN SIGNATURE BLOCK ###
No support requests per PM! You will NOT get any reply!!!
FTP connection problems? Do yourself a favor and read Network Configuration.
FileZilla connection test: https://filezilla-project.org/conntest.php
### END SIGNATURE BLOCK ###
Top

Since it's a client-side vulnerability, no update for FileZilla Server is required.
Top

FTP suffers from data connection stealing vulnerability [1][2]. While there are mitigations for plaintext FTP they are incomplete. Without bi-directional authentication, an attacker can steal the data connections and do tricks like swapping connections between users.

There are two mechanisms in FTP over TLS that can solve connection stealing:
- Client certificates [3][a] and
- TLS session resumption [4][5]

With an unresumed session, the client can only check that the connection comes from the server. The client however cannot verify that the data connection is associated with his control connection.

Likewise, without resumption the server cannot verify the authenticity of the client.


Session resumption can be facilitaded through different means:
- Session IDs and a server-side session cache
- Session tickets sent to the client

Both work equally well for FTP over TLS.

Due to an implementation flaw in some servers, an attacker can inject his own session into the server's TLS context.

The problem is that these servers, while requiring session resumption, do not verify that it is indeed the same session on both control- and data connection. Thus, if an attacker can inject a session, he can then resume it and thus successfully steal data connections.


Let's assume Alice wants to download a file from Bob. She has established a control connection with Bob and has just issued the PASV and RETR commands. Mallory sees Alice's attempt to establish the data connection and connects to the server in place of Alice. Mallory does however not know a valid session on the server.
After the data connection handshake, Bob checks whether the connection was resumed and, noticing it isn't, drops it.

At this point however, Mallory now knows of a valid session: The one that just got closed! He now either has a session ID or a session ticket.

The next time Alice wants to transfer a file using the same control connection to Bob, Mallory attempts to steal the connection again. Mallory presents his own session in the TLS handshake. Bob sees that the connection is resumed. Not checking that the session matches the session of the data connection, Bob then proceeds sending the file to who he believes is Alice.

In the following we assume that the FTP server uses OpenSSL to keep things simple and concrete. There is no reason however to assume that the problem does not occur with other TLS implementations.

When performing a handshake that isn't resumed, OpenSSL adds the new session to its session cache and sends a session ticket to the client. This is done before the FTP server checks whether the session is resumed or not, thus even if the server decides to drop the unresumed connection, the client now has valid session credentials.

The next time the client connects he can thus present a valid session to the server.

There are at least two feasible solutions:

[a] I believe that with client certificates an attacker could still swap data
connections belonging to the same user.

When import a queue containing 5 million files I noticed that FileZilla was consuming over 16 GiB of memory while the queue was being imported. That's far too much for so few files.

To process XML files, FileZilla so far has been using TinyXML. I have always known that TinyXML is not the best in terms of performance or memory footprint and furthermore TinyXML isn't being improved anymore so I started looking for an alternative.

Of course there was the option of TinyXML-2, the official TinyXML successor which is claimed to perform better. But how much better? What about other alternatives? After spending a bit of time using my favorite Internet search engine, I quickly I stumbled across pugixml which to my delight had a nice and recent benchmark, comparing many different XML libraries: http://pugixml.org/benchmark.html

Based on the benchmark data, two options suggested themselves to me: Either update to TinyXML-2 or switch to pugixml.

I had a quick look at the TinyXML-2 API documentation. Nothing spectacular there, very similar to the old TinyXML-1.

Next I studied the pugixml documentation and found a simple, well thought-out API. One of the key difference between TinyXML and pugixml is the way the DOM-tree is accessed. In TinyXML, the accessors to get child nodes return pointers. In pugixml they return handles and strings can never be null. Why does this matter? Well, look at this example:

A striking difference! To be fair TinyXML has the TiXmlHandle class, but it has its own drawbacks, especially it cannot be used to modify the tree.

From here the way forward was clear: Migrate to pugixml. While tedious, changing FileZilla to use pugixml was a simple task. After fixing about two thousand compile errors, almost everything worked directly.

Memory usage importing that huge queue is down to about 40% and it only takes about 30% of the time to import the file.
Top

I want to make my windows 2008 R2 to be FTP server and using filezilla server for this but after the configuration I am getting the error:-
Warning: FTP over TLS is not enabled, users cannot securely log in.
You appear to be behind a NAT router. Please configure the passive mode settings and forward a range of ports in your router.

It's not an error, but a warning.

The TLS warning indicates you didn't create/import an SSL certificate and enable TLS, yet.
https://wiki.filezilla-project.org/SSL/TLS

The other is about the server not being reachable from the outside world as you are behind a NAT device (a router, usually). Please read the Network Configuration Guide, Passive chapter.

With those things configured, the warnings should disappear.
### BEGIN SIGNATURE BLOCK ###
No support requests per PM! You will NOT get any reply!!!
FTP connection problems? Do yourself a favor and read Network Configuration.
FileZilla connection test: https://filezilla-project.org/conntest.php
### END SIGNATURE BLOCK ###
Top

Just a small teaser of some work in progress: libfilezilla. Expect more news in the coming days.
Top

One feature I'm implementing for the next version of FileZilla are colored tabs.

As with many things, the feature itself is quite trivial. Adding color to a tab is easy. The complexity is integrating it with the surrounding features.

The biggest issue is how to integrate it into the Site Manager. As it goes, adding it to the site manager itself is also quite easy. Yet the complexity is once again integrating it with the surrounding features, in this case the reconnect and bookmark features, which indirectly use the site manager.

This complexity is the result of a dynamically grown feature set: The Site Manager has been implemented first. Later, the Bookmarks were added. Last but not least, tabs were implemented. Needless to say that no prior feature had been prepared in advance for the following feature.

To solve this mess I'm going to create a completely new model that will deal with the site data. All existing Site Manager and bookmarks functionality will be changed, or rewritten, to use this new model. With the new model, all users will hold references to the relevant site entry, instead of copying just some of the data or relying on getting it from elsewhere.
Top

How does this look? 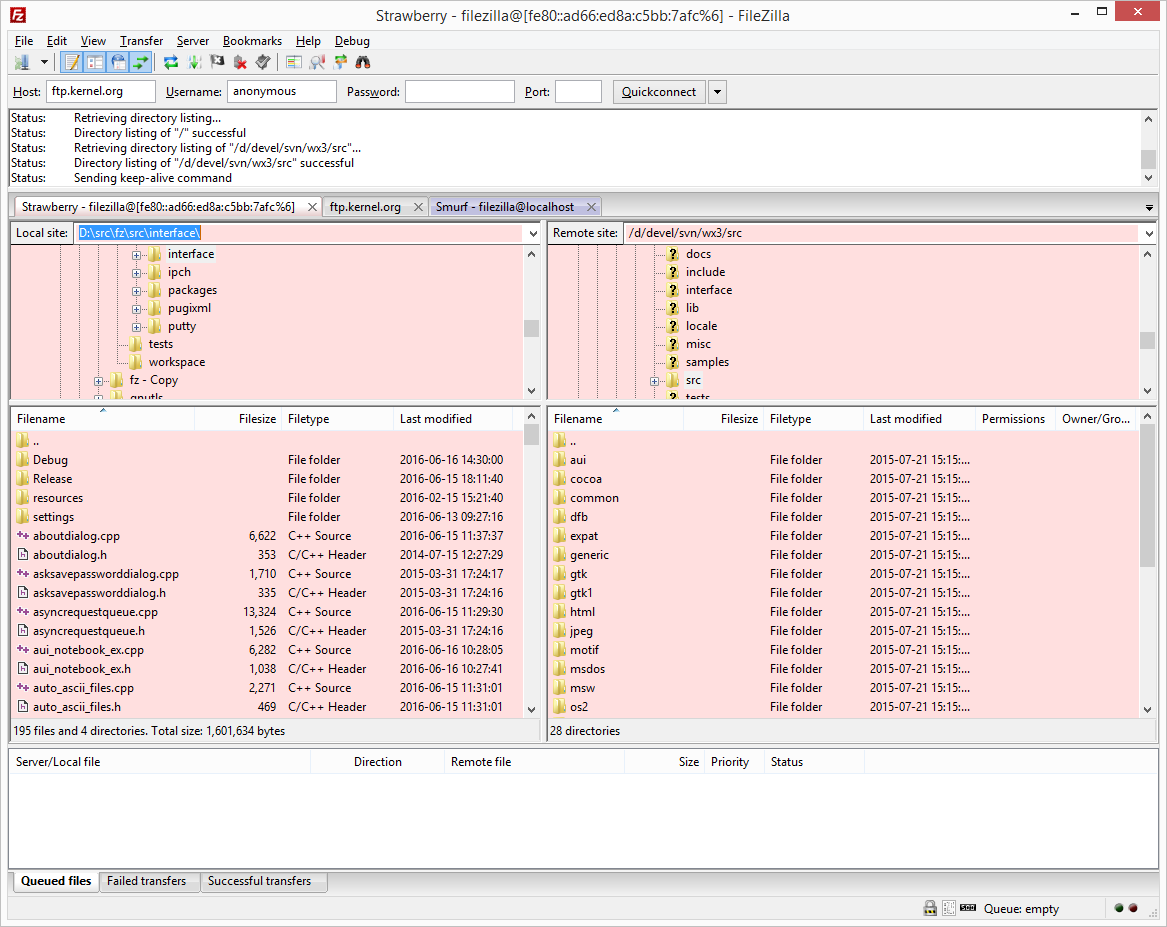 Colorful. (Well, you had to ask!

One of the upcoming changes I mentioned in viewtopic.php?t=36597 might soon come to FileZilla. I'm thinking of dropping support for non-UTF-8 encodings, or at least to severely reduce the fallback capabilities.

Maintaining the byzantine, borderline undefined fallback chains still in FileZilla becomes increasingly difficult, in particular since it's nigh impossible to test them, I don't have access to those broken servers what would require such a feature.

Is anybody reading this still using any non-UTF8 non-ASCII character encoding? I'd like to hear your rationale as to the why.
Top
Post Reply
1028 posts